Why all boys Need To Watch Moana, This Half Term 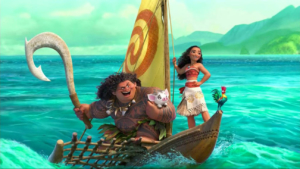 It may seem like just another Disney trudge, but Moana, available to stream now, is a film that every boy needs to watch.

Many of the boys that we nanny for are your typical 5-12 year old; love football (not all) and computer games (all), love an action films (sometimes not age appropriate ones) and cinema, but none of ones we asked, had seen Moana.

As a 30 something I am definitely not the target audience, but with two nieces I have not only seen it once, but I loved it so much, I went a second time with my partner (she loved it too).

So blown away by how refreshing and forward thinking the film was, I am even considering a third viewing with my nieces (they won’t need much persuading), particularly as they haven’t stopped singing the songs since.

It has it all: action, loveable character, hateable characters, killer coconuts, a stupid chicken, a cute piglet, a pushy dad and a ‘shiny’ crab. To couple these wonderful additions, the soundtrack is ace; there is even a nod to the late and great Bowe on there too (not credited by Disney, but it’s there alright).

What makes this so refreshing is that the protagonist is not searching for a prince to save; not seeking an evil secondary female character to undo a spell and not being constantly placed in heels and glittering dresses. Moana is a headstrong girl with ambitions that go beyond her immediate surroundings.

Boys need to see this film, not just because it is a wonderful story with incredible animation, but because this film shouldn’t be a one off and should be the norm. Were the Rock’s character the main in this, I have no doubt that many of the boys we nanny for would have seen it ten times over.

Sit your boys down, get some popcorn ready and be ready to enjoy this film just as much as they most definitely will.

For more information on how we can find you the perfect Manny or Nanny, get in touch below.